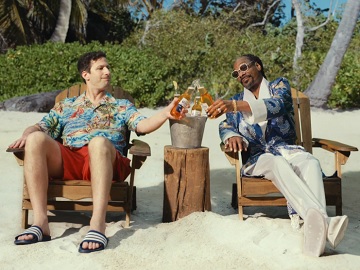 Corona has released a new commercial starring Snoop Dogg and Andy Samberg. This time, the two exchange rhymes inspired by the beach and their Corona Extra drinks.

The spot features the duo lounging in the sun, on the beach, with Samberg trying to rap and impress thus Snoop. When the latter says “A Corona and palm trees”, Samberg says “A Corona and calm seas”. The comedian then finds other rhymes, such as “some long knees, strong like a tongue squeeze”. After composing a short rap song on the spot, he asks his fellow rapper if that was good, but Snoop Dogg is not impressed at all. He describes Andy’s efforts as “incredible-ly bad” unlike their drinks, which he deems as good.

The ad concludes with the tagline “Corona. La vida más fina” appearing on the screen.

Snoop Dogg was enlisted by the beer brand in March 2020 to star in its “La vida más fina” campaign.

In another ad, he promotes the brand’s redesigned Corona Extra slim cans and says that these new cans are named after him (as Slim is one of his old nicknames). However, the subtitles appearing on the screen inform that they are not named after Snoop Dogg or affiliated with any nicknames.

Snoop Dogg is also known for his partnership with several other brands, including Just Eat and SodaStream.