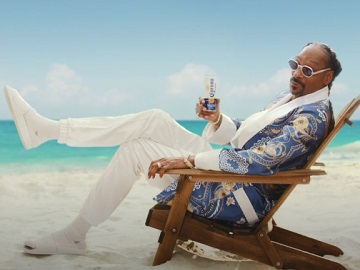 The spot features the rapper walking down a tropical beach holding a Corona Extra can in his hand and saying that these new cans are named after him (as Slim is one of his old nicknames). However, the subtitles appearing on the screen inform that they are not actually named after Snoop Dogg or affiliated with any nicknames at all. The rapper then takes a seat in an Adirondack chair and adds that might as well be named “Snoop Cans”.

The commercial ends with the tagline “La vida más fina” flashing across the screen.

Snoop Dogg was tapped by the beer brand in March 2020 to star in its “La vida más fina” campaign.

In another recent ad, which features Devin Booker, Vince Carter, Christian Laettner, and Sue Bird happen to have some very strong opinions on the perfect shade of blue, Snoop Dogg urges viewers to live their best life in any color.