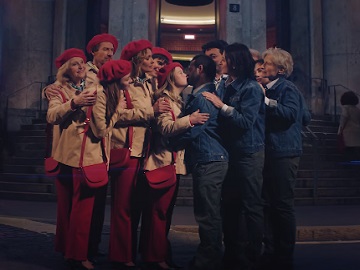 CoorDown celebrates World Down Syndrome Day (22 March 2022) with a new film, highlighting that people with Down syndrome have the right to independent love life.

The spot, part of an international awareness campaign that promotes the right of people with Down syndrome to live a romantic relationship and an independent sex life and to receive correct and accessible information to fully enjoy a healthy and free sexuality, features a young couple with Down syndrome surrounded by their families (each illustrated as a tight-knit group, wearing matching clothes) at every single step they take. Every time they embrace and kiss, their family members are at their back. At some point, though, when they find themselves “suffocated” by their families even at night, in bed, the two young lovers decide to stand for what they want and ask their closed ones to give them space, because “Love needs space”.

Serving as soundtrack is a cover by Stabbiolo Music of the song “Just The Two Of Us”, originally performed by Grover Washington Jr. and Bill Withers.

The film has been directed by Martin Romanella e Augusto Gimenez Zapiola, and produced by Indiana Production.
The “Just the Two of Us” campaign, which marks the tenth collaboration of CoorDown with Luca Lorenzini and Luca Pannese, creative executive directors of agency SMALL from New York, also includes a special website, justthetwoofus.org, which offers information and resources on the sexuality of people with Down syndrome and mental disabilities.