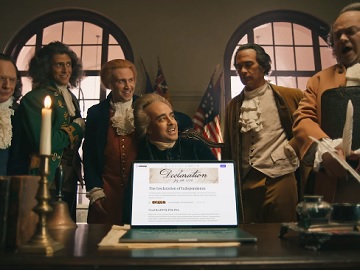 ClickUp has unveiled its Super Bowl commercial, highlighting that, with ClickUp, every version of every project is tracked in one place, so you can declare independence over different versions of a document.

The humorous ad is set in 1776 Philadelphia and features the Founding Fathers having trouble finding the final copy of the Declaration of Independence. Luckily, one smart signee, Tommy, who has brought his laptop, shows everyone how ClickUp can save the day. He tells his “fellas” to relax because he created a ClickUp task and tells them they just have to click.

The commercial, which ends with the tagline “All of your docs in one place,” flashing across the screen, will air during the third quarter of the Big Game.

“ClickUp’s mission as a company is to make the world more productive and save people time, and we can’t think of a better time to introduce ourselves to millions of new people than during one of the best days of the year to kick back, relax, and have fun,” Chief Creative Officer Melissa Rosenthal said in a press statement.