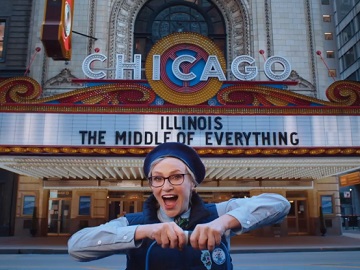 Jane Lynch directs and stars in “Christmas in Chicago”, the latest commercial for the Illinois Office of Tourism.

The award-winning actress showcases some of the places you can visit and the experiences you can have while visiting Chicago, such as Maggie Daley Park, where you can have long, relaxing walks and ice skate, the Christkindlmarket Chicago, where you can purchase Christmas decorations, and the Gibsons Steaks-Fish, where you can enjoy tasty meals. “It’s impossible to leave Chicago hungry,” she declares, before posing in front of a movie theater and visiting the Museum of Science and Industry. The ad also gives viewers a glimpse at some of the creations visitors can admire at the East Peoria Festival of Lights.

The actress, whose home state is Illinois, has starred in several other ads for the Illinois Office of Tourism, two of which she has also directed.

Playing the role of official tour guide, Lynch does lots of other interesting things, such as coming face-to-hologram-face with Honest Abe at the Abraham Lincoln Presidential Library and Museum in Springfield, getting her kicks at the Illinois Route 66 Hall of Fame & Museum in Pontiac and waddling with penguins at the Shedd Aquarium in Chicago.