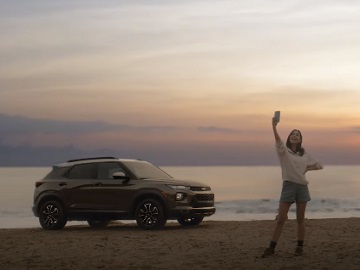 “The 2022 Chevy Blazer and Trailblazer are siblings. But with both featuring style, capability and safety, there is no rivalry.” This is the idea behind the latest Chevrolet commercial, titled “Sibling Rivalry”.

The 30-second ad features Ashley and Lily, a pair of twins who are in a sibling rivalry and take it to social media. First, Ashley, who’s driving the 2022 Chevy Blazer RS, asks her “sis” to check out the cute spot she’s in, in an urband environment. Lily, who took her 2022 Chevy Trailblazer Activ outside the city, answers that she prefers her coffee with a view. They go on like this with various other posts, which they write standing near their cars. While Ashley takes a spin class and heads to the top of a parking structure overlooking the city to end the day, Lily goes on a bike ride and then to the beach for the sunset.

“They’re siblings, but there’s no rivalry,” the voiceover says at the end of the commercial.