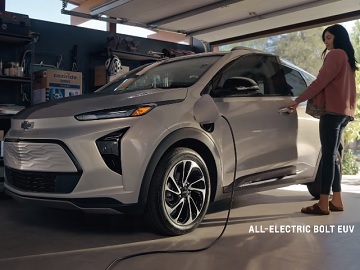 Chevrolet advertises its 2022 Chevy Bolt EUV in a new commercial, highlighting how easy it is to charge it.

The spot features a pregnant woman talking to a Chevrolet representative that came by to her house to help her out with the home installation kit of her 2022 Chevy Bolt EUV. The mother-to-be says she is excited for having a baby, but also a little bit nervous about it. The other woman, who reveals she has a child, assures her that it’s not that hard as people think it is and that it’s “totally a piece of cake”. She then plugs in the charger into the EUV and points out how easy it is. “I hope being a mom is that easy,” the pregnant lady says. “It’s not!” the Chevrolet representative says, bursting into laughter and saying bye, leaving the woman worried about what future might hold for her.