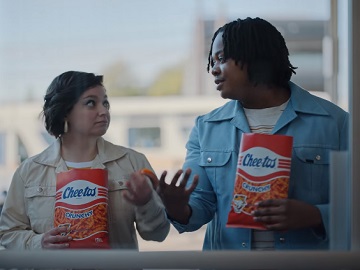 Cheetos has launched a new ad campaign, called “Hands-Free,” which aims to reveal that Cheetle might be the inspiration behind hands-free technology.

The spot features a diverse cast of people who think they invented various hands-free technologies as their hands are stained with Cheetle, the iconic orange dust and cannot carry out everyday tasks. They thus come up with ideas like automatic doors, robotic vacuum cleanera, Facial recognition on phones, and self-driving cars.

“If it’s hands-free, it’s a Cheetos thing” an onscreen line reads at the end of the commercial.

The song used in the ad is the 2011 single Dragostea Din Tei (with official English title “Words of Love” and also informally known as “Ma Ya Hi”) by Moldovan pop group O-Zone. The track, included on the band’s third studio album, DiscO-Zone, is available for purchase on Amazon for $1.29.

The Cheetos Hands Free campaign also includes an activation called Hands-Free House, which is an innovative, Cheetle-on-the-fingers-friendly home, designed to showcase how technology can be used to power everyday activities that normally require the use of your hands. It does immerses guests into a modern space that features tech-enabled entry, smudge-free remote controls and Alexa voice-activated appliances.