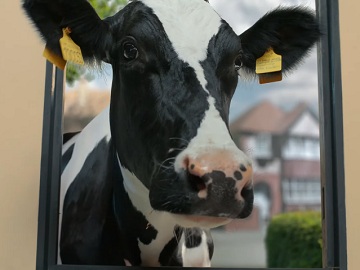 Cathedral City highlights, in its latest advert, the skill and dedication involved in producing its much-loved cheddar.

The 30-second spot opens with a boy named Billy asking his dad, who’s grating some cheddar on a chopping board, where that cheddar comes from. As the man is left speechless, a cow shows up at their window, giving him the answer: “Earthworms”. “Yes, earthworms make soil richer for the grassiest grass helping our folks make quality cheese. Our farmers make cows comfy. A comfy cow makes milky milk. And our cheese tasters sample up to 700 bits a week to make sure it’s consistently delicious,” explains the talking cow.

However, Billy’s father, who has made, in the meantime, grilled sandwiches for them, takes a seat at the table near him and tells him that the cheddar comes from Cathedral City.

The advert ends with the voiceover saying the tagline “Our Make it Better Cheddar”, while on the screen the Cathedral City Mature Cheddar is shown.

Previous: British Army Nothing Can Do What A Soldier Can Do Advert – Feat. Laser-Eyed Robot
Next: Haven TV Advert – Have So Much More For So Much Less