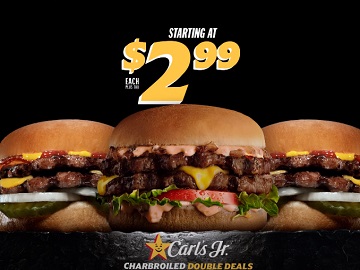 Carl’s Jr. has released a series of new ads to promote its Charbroiled Double Deals.

The spot features one of the hosts of the “Bite This” program announcing they’ve obtained documents revealing that Carl’s Jr. is offering Charbroiled Double Deals starting at $2.99 each. His co-host asks if she can take a closer look and puts her hands to her eyes as if she’s wearing eyeglasses. “Oh, wow!” she exclaims, while onscreen lines as breaking news read “So much taste, so much value”.

At the end of the commercial, the voiceover urges viewers to bite into these Double Deals starting at $2.99 each at Carl’s Jr.

In another ad, the same host announces, during a boring market watch, that Carl’s Jr is offering Charbroiled Double Deals starting at $2.99 each.

Previous: Domino’s Pizza UK Castaways Advert
Next: Rent the Runaway Buy Nothing Wear It All Commercial