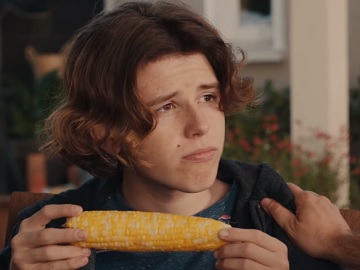 CarLotz, a leading consignment-to-retail used vehicle marketplace, has released a series of new ads to promote its website.

One of them features a father making a reveal to his teenage son, who’s sitting at the table, next to him, eating corn. “Son, I think it’s time you knew something,” he tells the boy. He then says he’s also a used car salesman (besides being an accountant) because he sold his car to CarLotz for a great price. The good news is that, now, the boy can finally have those braces.

As the spot ends and the teenager smiles, the man realizes the urgency for the kid to have proper braces.

In the longer version of the ad, dubbed “Family Traditions,” the man tells his son that being a used car salesperson is a family tradition, actually. The dad unveils that the boy’s mom, uncle Tim, and second cousin Pete are also used car salespersons. “You see, buying, selling, and consigning cars with CarLotz is a proud family tradition,” he adds. When the teenager says he thought their family tradition was long-winded toasts, his grandfather shows up, willing to have a toast. “I’d like to say a few words about life, laughter, and used cars,” the old man says, beginning a story about how when he was the kid’s age he knew that there was something about used cars.

The commercial ends with the CarLotz logo and tagline “Buy. Sell. Consign.”