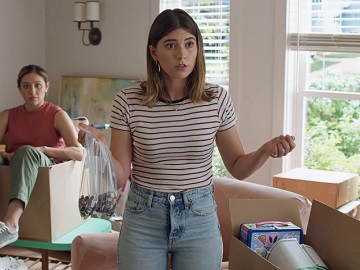 The 30-second ad features a young woman helped by a friend to pack up her belongings and move out. When the latter finds a giant bag of buttons in one of the boxes and wants to understand the reason why she’s taking it with her, the woman says they’re lucky and, looking at her phone, announces that she has just sold her car with CarGurus.

At this point, two CarGurus representatives show up into her living room, with her car, and explain that the owner instantly got the best most competitive offer from the network of thousands of CarGurus dealerships. The best part is that they can pick up the car right from your home. Having the lucky buttons spilled across the floor, the woman’s friend asks the reps if they pick up buttons, too, but they declare cars are more their thing.

The commercial ends with the voiceover saying the tagline “CarGurus. Get the best offer for your car”.