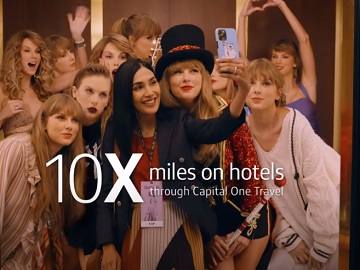 Capital One has released a new ad starring Taylor Swift to promote its Venture X card.

The spot features a diverse cast of people using their Capital One Venture X card to pay for their purchases of products and services. A mother of a teenage girl pays contactless in a store where they get to see two versions of Taylor Swift trying on some noise-canceling headphones. A man waiting in line in a coffee shop is buying his flight ticket with the Venture X Card and another version of the pop superstar appears next to him, along with other four “clones” of her, praising him for his choice. In a hotel, one Venture X card member paying for their hotel room gets to share the elevator with multiple Taylors.

The ad informs that the Venture X card from Capital One gives you premium travel benefits, like 2X miles on every purchase, 5X miles on flights, and 10X miles on hotels through Capital One Travel, and, in addition, access to over 1,300 airport lounges.

The commercial ends with a barista in an airport lounge who, after seeing the one and only Taylor Swift appearing in front of him and asking for white wine, pours too much wine into a glass. Viewers are encouraged to learn more about tickets at taylorswift.com/events.

This is not the first Capital One ad featuring Taylor Swift. The artist’s partnership with Capital One debuted in 2019. In one of the commercials, she starred as a waitress in a diner and her single “Me!” (from her 2019 “Lover” album), played on a jukebox, served as the soundtrack.

Capital One provides a broad range of financial products and services from personal credit cards or business credit cards, savings accounts, to auto loans and is known for partnering with several celebrities, including Jennifer Garner, Samuel L. Jackson, John Travolta, and more, for its ad campaigns.