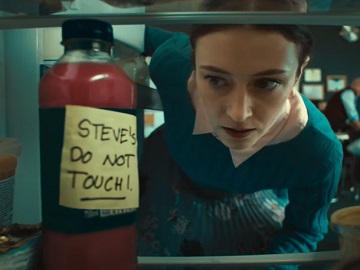 Capital One has launched a new ad campaign, titled “One Good Thing”, to highlight that Capital One “does credit like everyone’s watching”.

Created by Fold7, the spot marks the ad agency’s first work for the brand since its appointment back in 2021 and depicts a variety of scenarios in which people are acting as if no one’s watching them. A woman lies to the person she’s having a phone conversation with, telling them she can’t talk because she’s on the train and it might cut out, when she’s actually at home, another woman uses a coworker’s bottle of tomato sauce from the fridge, even though there’s a note on it saying “Steve’s Do not touch”, a girl’s dad watches a football game during a meeting with the girl’s teacher, a waiter grabs something from a plate to taste it, and a couple rushes to queue in front of a pregnant woman who was apparently not paying attention because she was watching at her smartphone.

“It can be tempting to behave differently when you think no one’s watching,” the voiceover says toward the end of the spot, adding “At Capital One, we make a point of always doing credit like everyone’s watching, always being upfront by letting you know if you’ll be accepted before you apply and the exact API you’ll be offered, just as it should be.” Eventually, the tagline “That’s One Good Thing” appears on the screen.