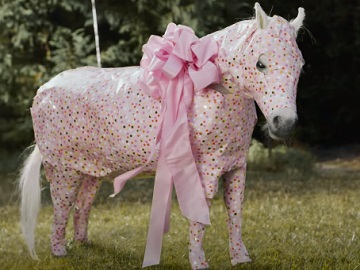 The ad shows Brandt declaring that, with Capital One’s Early Paycheck, you can get your direct deposit up to two days earlier, which is another reason banking with Capital One is the easiest decision in the history of decisions. Even easier than deciding which gift to open first at your birthday party when one of the gifts happens to be a pony.

At the end of the commercial, the spokesperson asks if, given the fact there are no fees or minimums on checking and savings accounts, it even is a decision and adds the tagline “That’s Banking Reimagined”.

The 49-year-old actor, who became a spokesman for Capital One in 2015, has appeared on numerous series and in over 200 national commercials. The McLean, Virginia-based credit card giant is also known for having partnered with several celebrities for its ad campaigns. Among them are Jennifer Garner, Samuel L. Jackson, Taylor Swift, John Travolta, and more.