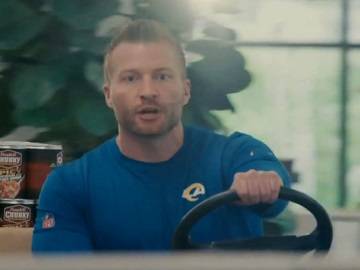 The spot follows the LA Rams coach as he’s zooming through an office with a golf cart full of Campbell’s Chunky soups to provide a filling lunch for some of the employees. He throws cans of Campbell’s Chunky to various workers, mentioning that one can has 17 grams of protein. They all catch the cans declaring “mission accepted”.

At the end of the commercial, when a can of Spicy Chicken and Sausage Gumbo is shown on the screen, the voiceover says the tagline “Lunch Time Is Your Half Time”.

The brand, which is the Official Soup Sponsor of the NFL, launched its “Lunchtime is your Halftime” campaign in partnership with Leo Burnett and Spark Foundry in order to ensure all Americans take a much-needed lunch break this football season. For the campaign, which includes social, digital, TV, e-commerce, network streaming, and dynamic content, Campbell’s has also teamed up with Indianapolis Colt’s running back Jonathan Taylor.