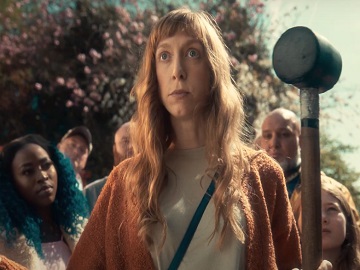 California Almonds promotes the upcoming Marvel Studios’ “Thor: Love and Thunder” in a new commercial, that carries the tagline “Do You Almond?”.

The spot, which celebrates the release of the new movie, only in theaters July 8, is set in an amusement park and features a woman who puts aside her bowl of almonds and reaches the highest level at a game thanks to the superpowers she gets from almonds. The hammer she grabs from a man becomes like a sort of Stormbreaker and she leaves everyone, including the teddy bears, in awe with her performance.

“Feel a little super with the natural power of almonds,” the voiceover says at the end of the commercial, adding the tagline “Do you almond?”.

In another spot, the brand’s mascot, Al, cuts in to share the limelight with Mjolnir and Stormbreaker, the iconic weapons of Mighty Thor and Thor.

The brand says almonds are an excellent source of essential vitamins and nutrients, including antioxidant vitamin E, magnesium, 6g of plant-based protein, and 4g of fiber per 1 oz serving, and can be your super-powered friend in wellness.

In “Thor: Love and Thunder”, the God of Thunder teams up with King Valkyrie, Korg and ex-girlfriend-turned-Mighty-Thor Jane Foster to take on a galactic killer known as Gorr the God Butcher.