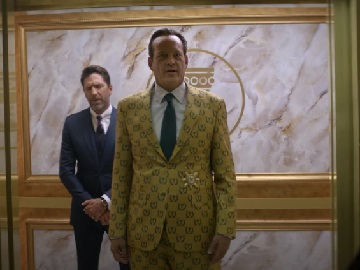 Caesars Sportsbook and Casino has teamed up with Vince Vaughn and introduced him as PRINCE VAUGHN in a short ad.

The spot creates tension as elevator doors are seen slowly opening to reveal the identity of the newest member of Caesar’s royal family. “He’s the Sultan of Slots, the Lord of Live Dealers, who treats every player like royalty” onscreen lines read throughout the 20-second ad, which reveals the actor as a wealthy, eccentric man in a suit who scolds the person he meets in front of the elevator that he had suggested to meet by the exit, not the elevator. “Thank goodness I saw you, would have never found you in the crowd,” he also tells the man, who seems to be Caesar and cannot go unnoticed anywhere.

The actor, who is the latest celebrity to join Caesars Entertainment’s star-studded stable of famous endorsers, was described as “a true representation of the fun, entertainment, and experiences all Caesars deserve”.

He will appear in upcoming ad campaigns for the gaming company and will also be promoting experiences and events for Caesars Rewards members.

“Vaughn unveiled the newly designed Main Event bracelet during his procession, before offering a few words and making the iconic ‘Shuffle Up and Deal’ announcement to kick off the last of the prestigious Main Event $10,000 No-Limit Hold’em flights,” according to Caesars.