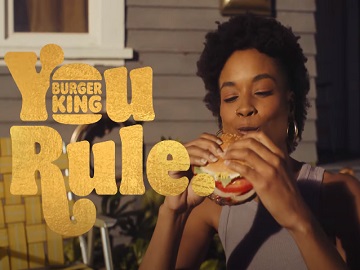 Burger King celebrates its customers in a new campaign, that also introduces a new tagline, “You Rule”.

The campaign debuted on October 10 with a spot that features a new take on the iconic “Have it Your Way” jingle. Created in partnership with the fast-food chain’s new creative agency of record for the U.S., OKRP, the ad features a diverse cast of people enjoying their favorite Burger King menu items, from burgers to onion rings and various drinks, while doing activities they enjoy, like applying makeup or bike riding.

Serving as soundtrack is an original remix of the “Have it Your Way” jingle, which was first introduced in the 1970s. Its lyrics include “I do things the way I wanna do them, make my own rules and listen to them, don’t let anyone go rain on my parade. You rule! I think I want a flame-grilled classic. A Whopper sure does sound fantastic. Go tell them the way I want it, they say ‘OK’. You rule, you’re seizing the day at BK. Have it your way!”.

“You Rule” has been described as “a play on the QSR chain’s mascot and famous paper crowns in an effort to deliver the message that Burger King guests are royalty”.

The campaign will include other spots as well and will also run across BK restaurants.