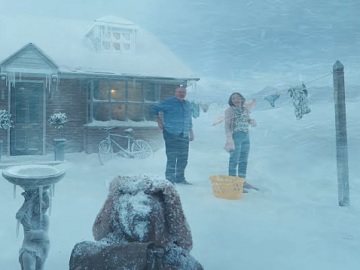 Property website Boomin has released a new ad to promote its mobile app and some of its unique features, which include Secret Property, Sneak Peak, MatchMaker, ChainMaker and SmartVal.

The spot, created by SNAP LDN, opens with three Antarctic explorers who, after enduring 27 days of frozen hell, finally reached their destination at the South Pole. They think they are the first ones there, but it turns out there already is a couple who found the property on Boomin. The two home owners explain that they got valuations on their old house from three local agents in minutes thanks to Boomin SmartVal tool and when that place appeared first on Boomin they knew they could afford it and were ready to snap it up before it reached the market.

The advert ends with the voiceover saying the tagline “Get there before they do” and with the website – Boomin.com – flashing across the screen.

The ad, which debuted on December 26, 2021, is part of Boomin’s “Get There Before They Do” campaign, which builds on the “Good Things Happen” advertising which marked the portal’s launch in April 2021.