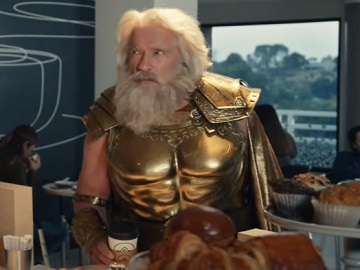 BMW has unveiled a teaser for its Super Bowl commercial, starring Arnold Schwarzenegger.

The video features the actor as Zeus, who shows up in a local coffee shop in full Zeus gear to pick up his macchiato. When the barista botches his name, the god of lightning corrects him and, without saying other words, walks out.

The commercial, created by Goodby Silverstein & Partners, is set to air during the first quarter of the Big Game, on February 13. The automaker has also unveiled that Salma Hayek Pinault will also star in the ad as Hera, which according to Greek mythology is the wife of Zeus and goddess of marriage.

BMW will debut two EVs next month: the iX and i4 and, most probably, its Big Game ad will feature at least one of them.