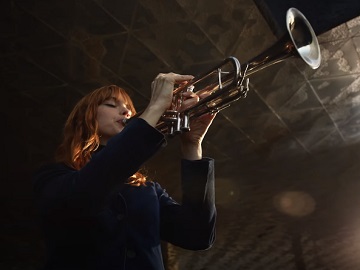 BMW advertises its new BMW 3 Series in a spot running in the UK.

The spot opens with a red-haired young woman playing the trumpet and features juxtaposed footage of the new BMW 3 Series and a musical group performing on a stage.

“Improvement inspires improvement” an onscreen line reads at the end of the advert, which also sees the tagline “The Ultimate Driving Machine” appearing on the screen.

The automotive brand says that, when it came to the new 3 Series, they experimented, challenged and refined, both inside and out. The result is a more athletic appearance with new LED headlights that frame the enlarged kidney grille, and a more refined interior that’s designed to make every journey more connected.

According to BMW, the 2023 3 Series brings power and innovation together in a luxury sports sedan made to move. It features the M340i’s robust engine, 382 horsepower, up to 19″ wheels and new exterior paint colors designed to stand out in a crowd, an interior that boasts a redesigned dashboard with an all-new BMW Curved Display – combining a 12.3″ Digital Instrument Cluster and 14.9″ Central Information Display, and a brand-new rocker switch for gear selection.