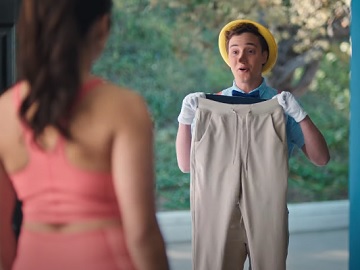 birddogs promotes its shorts and pants with a built-in liner in a new commercial, highlighting that these pieces are so comfortable that even Pinocchio could sell them.

The spot opens with a man asking his friend if the liners on those birddog joggers are really that comfortable. The latter says he’s not lying and that even Pinocchio could sell these things. The next scene features Pinocchio at a young woman’s front door, showcasing some birddog pants with a built-in liner which he sells by going door-to-door. He praises them as “super comfortable” and the woman states that they do look comfortable.

She then asks Pinocchio, whose nose hasn’t grown at all during their conversation, if he wants to go for a ride and he agrees. However, the moment she notices an old, damaged car behind him, she can’t help asking if it’s his car. The wooden character denies and his nose immediately grows longer, almost reaching the woman’s face.

The commercial ends with the brand’s logo and the line “shorts and pants with built-in liner” appearing on the screen.