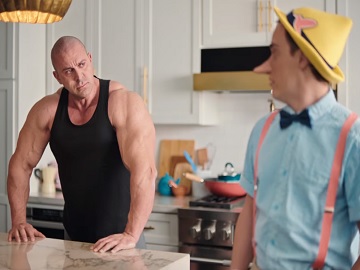 birddogs has released a series of new ads featuring Pinocchio to promote its pants with built-in liner.

One of them opens with a man telling his friend that even Pinocchio could sell the birddogs joggers because they look great and they’re also super comfortable. The wooden character is then shown telling a woman that the best thing about the birddogs joggers is that they’re stretchy so they look good on everybody. At this point, a bodybuilder, who it turns out was listening to their conversation nearby, asks Pinocchio if he can try them on. The next scene features Pinocchio trying to help the bodybuilder fit into those joggers and telling him, in the end, that they look great on him. However, as his voice is heard behind a closed bedroom door, his nose comes out through the wall.

Eventually, the brand’s logo and the line “shorts and pants with built-in liner” flashes across the screen.

In another ad, Pinocchio sells birddogs pants by going door-to-door and meets a woman who asks him if he wants to go out. His chance to actually go on a date with her is ruined when she realizes what type of car he has.