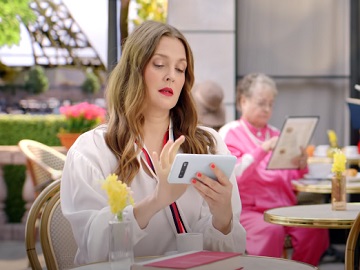 Bingo Blitz, the world’s most popular free-to-play Bingo game, has partnered with Drew Barrymore for a new ad campaign.

One of the spots, titled “What got Drew Barrymore to scream?”, features the award-winning actress sitting at a table in a Parisian coffee shop, and shouting “Yes” multiple times while using her phone, getting thus everyone’s attention. When an old lady looking at the menu tells the waiter she wants to order what Drew is having, the waiter explains that, for this kind of excitement, she needs to download the Bingo Blitz app and mentions that it’s free.

At the end of the commercial, the voiceover urges viewers to download Bingo Blitz and get excited with awesome Bingo Rooms, special events, power ups, and challenging missions.

As part of the campaign, the actress was featured as her own in-game avatar in an eye-catching integration alongside the game’s adored mascot, Blitzy. Throughout the “Drew BingoMore Show” event, which debuted on September 7, 2022, Barrymore greeted players, offered tips and tricks, and gave prizes in multiple in-game features.

“I’m a huge gamer. I actually used to go to a Tuesday night weekly bingo game with all my friends. I love that it’s a game that everybody around the world can play. We are looking for a collective experience and Bingo Blitz is sort of the perfect one,” Barrymore said.