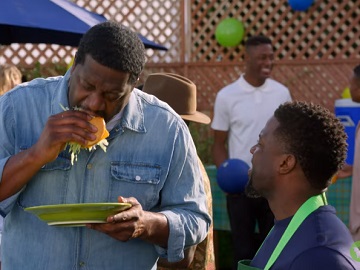 Kevin Hart is changing the world one burger at a time in the latest Beyond Meat commercial.

The spot, titled “Take Your BBQ Beyond,” opens with Hart giving Spank Horton a plant-based burger. His fellow can’t help asking when he started eating plant-based food at their cookout. “Don’t tell me you’re afraid to try something new, Spank!” Hart tells him. When Horton answers that they do the same every year and asks why change, the comedian points out that change is good and change happens often, but most people won’t change what they think is a good tradition, even if it’s better food. He also adds that traditions keep us connected to our past but we have to make decisions for the future and that we got to go beyond traditional thinking and make changes that are better for the planet.

Hart also tells his friend that eating plant-based and is actually fighting climate change. “Sometimes we overlook the most obvious things we can change and I don’t know why, some things should be easy, like eating Beyond Meat,” Hart says in voiceover at the end of the 60-second commercial.

“Packed with 20g of plant-based protein, less saturated fat and zero cholesterol, Beyond Burgers are better for you and the planet,” the brand declares.