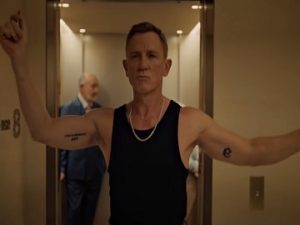 The British actor, famous for playing James Bond in the franchise series, shows off his dance moves in a two-minute-and-a-half commercial, directed by Oscar-winning filmmaker Taika Waititi.

Clad in a black leather jacket, which he takes off to reveal a black tank top, accessorized with a silver hip-hop chain and sunglasses, Craig is dancing through a swank hotel in Paris, to the rhythms of an original song performed by Rita Ora and Giggs. Some of the moves he makes are quite surprising for viewers, who get to see him thrusting his hips in an elevator, kicking water in an indoor pool, and going all-out on a rooftop.

Waititi also makes an appearance in the ad, right at the end, telling Craig “Let’s go again, just be yourself”, which makes the actor smile and reveal sparkling diamante “DG” grills.

Craig will reprise his role as detective Benoit Blanc in the upcoming sequel to Rian Johnson’s 2019 comedy-drama “Knives Out”, “Glass Onion: A Knives Out Mystery”.