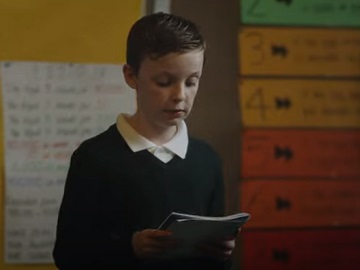 Children’s charity Barnardo’s has launched a new advert to highlight the influential and beneficial role its frontline workers play in the lives of the children they support.

The spot, created by Open Agency and directed by Amy Becker-Burnett, is based on the experiences of real child carers and features Luke, a young boy taking care of his mother, who is living with a long-term illness. The video shows him, on one hand, reading a speech about his weekend at school, and – on the other hand, how he actually spent his weekend. It turns out the “massive” breakfast he talks about was simply a bowl of cereals, the cinema trips were actually sessions of watching TV in the dark, sitting on the floor, and the times he chilled out and relaxed were actually moments when he did household chores, all while taking care of his unwell mom.

However, there is a moment when the boy’s description and reality align and this is when a Barnardo’s project worker, described as his friend Abby, arrives. She is shown dropping off a prescription for the mother and then taking Luke to enjoy some time separate from his caring responsibilities at home. Abby plays with him in the park, listens to what he has to say, and helps him study.

The advert, which features Aidan Gale as Luke, runs across ITV, Sky, and on-demand services from October 18 and is part of a wider campaign that aims to increase public understanding of the issues faced by vulnerable children, young people, and families across the UK as well as how the charity supports those most in need.