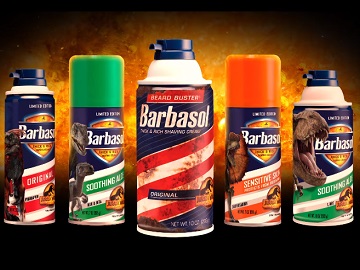 “For 30 years every thrilling moment has led to this” onscreen lines read in the 30-second ad, which shows the modified Barbasol shaving cream can that Dennis Nedry used to smuggle dinosaur embryos from Jurassic Park on Isla Nublar, falling in the mud, and various characters from the movie franchise.

A final onscreen line informs that the limited collector cans are in stores now and viewers are encouraged to “capture them all before they’re gone”.

The limited collector cans are adorned with different dinos, including the T-rex, Velociraptors, and Dilophosaurus.
Barbasol has even released a special can that is made to look like the battle-damaged can of Barbasol from the original Jurassic Park.

Fans are encouraged to visit the Barbasol website to see all the collectible cans and enter for a chance to win weekly Jurassic-themed prizes, including a Jurassic Sized Grand Prize.

There are several other brands that have been promoting Jurassic World: Dominion in the past weeks. Among them are Trolli, which has been giving away a Dilophasaurus’ weight in candy, Progressive, and more.