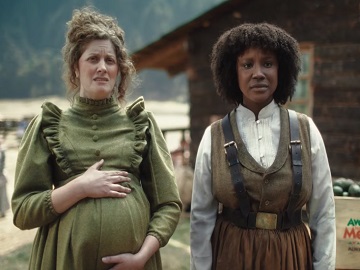 Avocados from Mexico touts itself as the Official Sponsor of Good in its latest commercial.

Titled “Gender Reveal”, the spot imagines a gender reveal party in the Wild West, where the guests find out that the expecting parents are going to gave a baby girl by being completely and unexpectedly covered in pink powder released by a huge cannon. When the pregnant woman shares her thoughts that this gender reveal party might have been a bad idea, her friend suggests they add some Avocados from Mexico. They do that and the party soon turns out to be a hit. “I can’t believe they taste good and they’re good for you,” the mother-to-be says about the avocados to her fellow, who answers instead “I can’t believe you’re having a girl”. At this point, the father, who’s standing near their seven sons, exclaims “This time’s a charm!”. “We have seven kids!” his wife tells him, making her husband and sons burst into laughter.

The commercial ends with the voiceover saying the tagline “Good times made possibile by the Official Sponsor of Good”.

Earlier this year, in August, Avocados from Mexico announced its official partnership with the National Bank Open presented by Rogers. The international tennis tournament took place from August 5 to 14, 2022 at IGA Stadium in Montreal and from August 6 to 14 at Sobeys Stadium in Toronto.