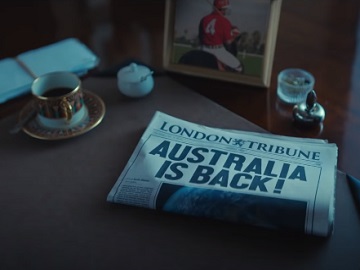 Created by The Monkeys and titled “The Lost Country of the Pacific,” the 3-minute film tells the story of a couple of explorers who want to reunite Australia with the rest of the world and call Sam Kekovich, known as “Lambassador” for Meat and Livestock Australia.

The smell of lamb cutlets coming from barbecues gets the world’s attention so, after breaking news across the continents, planes start to arrive again in Australia. Thousands of tourists come together see Australia and share the lamb.

The end of the film sees the couple of explorers talking about the world out there. The man, however, is not so willing to leave, saying he’ll stay in Australia for a little longer.

“Each year the ‘Share the Lamb’ brand gives us a great opportunity to showcase how the unmistakable flavour and aroma of lamb brings Aussie’s together, even through the very toughest of times. In 2021 we were all about breaking down state borders, but this year we’re ready to finally open back up to the rest of the world, and what better way to issue the invite than with tasty Australian Lamb,” MLA Domestic Market Manager, Graeme Yardy, said in a press statement.