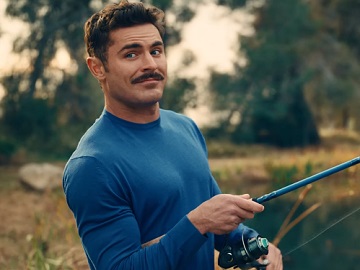 AT&T has teamed up with Zac Efron to star in its newest ad campaign, “Life, Gig-ified”, which marks the launch of new multi-gig internet speeds AT&T 2-Gig and 5-Gig.

The spot features the 34-year old actor fishing in the company of a fisherman who is played by Efron, as well. The two are in a sort of competition, each of them showcasing how the AT&T Fiber with multi-gigs speeds is next level. They mention that it’s way faster Internet, which means one can stream in 4K to every room in the house, it’s reliable, which means it won’t let you down when you’re deep into multiplayer end game, it will change the game in terms of creating content, allowing users to do that differently, upload huge files in a short time, produce content and live streaming it all at the same time. When Efron shows a pearl in an oyster, the fisherman brags with a necklace of pearls, and when Efron holds two huge lobsters, the fisherman grabs out of nowhere a plate with shrimp and start eating, while talking about how this level of connectivity could open up a door to the future.

Eventually, it turns out the fisherman was a game and Efron was actually in his living room, playing with a pair of VR goggles. “Hm, fishing game’s nuts,” he says while taking the headset off.

“I thought I understood the relationship between fishing and the internet, but then here comes #ATTFiber, now delivering up to 5-Gigs of speed. Totally game-changing. Literally,” Zac captioned the ad on his Instagram account.

Previous: TurboTax Shredder Commercial
Next: TSB David Schwimmer Advert – Savings That Sneak Up On You