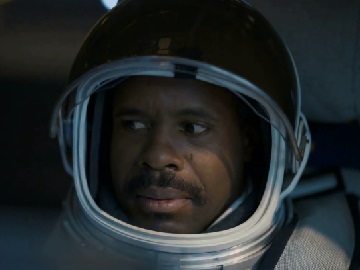 Titled “Space Launch”, the commercial features an astronaut ahead of a space launch inventing all kinds of reasons to delay the lift-off. First, he claims that his seat belt is unbuckled, then he shouts that “he’s open,” which makes the ground control crew very confused. They ask the pilot if they should delay take-off, but Lily realizes that he’s been watching a college football game through AT&T 5G the whole time. When one of the men near her exclaims that “it’s too much,” Lily answers that college football is never too much.

The commercial ends with the voiceover pointing out that AT&T 5G is fast, reliable and secure, and with an onscreen line informing that AT&T is an Official Sponsor of the College Football Playoff.

Longtime AT&T spokesperson Lily, played by Soviet-born American actress Milana Vayntrub, has starred in numerous other ads this year, including a series of March Madness-related ones, in which she talks to a host of celebrities, including actors Kumail Nanjiani and Zooey Deschanel, Coach Krzyzewski and Los Angeles Rams quarterback Matthew Stafford.