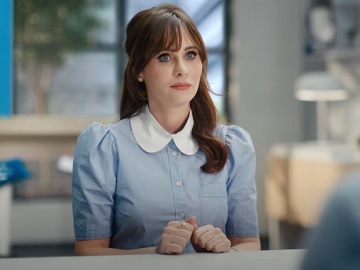 One of the spots opens with Lily telling Zooei Deschanel she is glad she might be able to cover for her during March Madness. The “New Girl” star mentions that people say they are “kind of alike”, which is something Lily already knows, and – after having the same reactions and yodelling at the same time, she impresses Lily with a crochet she has made. However, it turns out Zooey doesn’t get Lily’s reply when she says “Touché”. This doesn’t stop Lily to tell Zooey on the spot that she is hired. When Zooey tells Lily “You’re hired!” in response, Lily points out that she already works there.

The ad concludes with the voiceover saying that AT&T’s 5G is fast, reliable and secure even in the madness of March.

In other commercials, Lily, played by Soviet-born American actress Milana Vayntrub, talks to Kumail Nanjiani, Coach Krzyzewski, who has a job interview with her, and Matthew Stafford.