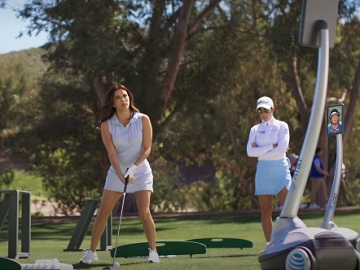 AT&T has released a new commercial to promote its 5G network. This time, the spot features Eva Longoria playing golf and having golf legends Nancy Lopez and Ben Crenshaw giving her tips on how to better her game.

The spot opens with golf player Maria Fassi telling Eva she called in some friends to help her with her game. Lopez and Crenshaw’s faces are seen on tablets used for a video call powered by AT&T’s 5G network. The two start giving the actress all kinds of instructions, such as check her alignment, widen her stance, loosen her grip, bend her knee, and more, that are quite hard to follow, which makes Longoria wish the network was not that reliable.

Eventually, she hits the ball, as Fassi tells her, and manages to score.

The voiceover points out, at the end of the commercial, that “AT&T helps push what’s possible, like making Eva better at golf”.

AT&T has been promoting its 5G network in several other ads in the past months. One of them features AT&T’s spokeswoman Lily and actress Zooey Deschanel. Looking for someone to replace her while she’s out for March Madness, Lily finds in the “New Girl” star a perfect fit. The latter impresses the AT&T rep with her crochet skills and the “5G” crochet she made.