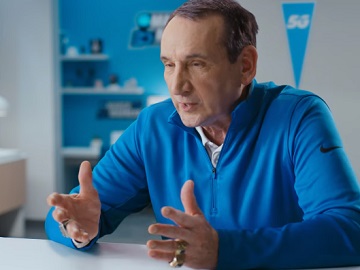 One of the spots features Coach K having a job interview with Lily, who wants someone to replace her in store where she’s out for March Madness. Looking at his resume, she asks him a few questions to understand if he would be a good fit for the job, but things don’t go too well. First, she wants to know if, besides having managed teams, he has ever managed a store, which makes Coach K admit that it would be a first, but he’s really confident he would be successful at it. Lily then asks him to say “AT&T 5G – Fast, reliable, secure”, but Coach K ignores her request and tells her, instead, that he can’t work the month of March. He explains that it will be a week-to-week thing and this obviously makes Lily stop the interview, realizing that she won’t hire him. However, she chooses to end the job interview by telling him that she will get back to him.

The ad concludes with the voiceover saying that AT&T’s 5G is fast, reliable and secure even in the madness of March.

In other commercials, Kumail Nanjiani practices in the mirror for hours the line that AT&T is fast, Stafford gets a training session on the trade-ins and learns that people can get a free Samsung Galaxy S22 when they trade in a Galaxy, any year, condition, and Zooey Deschanel impresses Lily with a 5G crochet she has made, making Lily hiring her on the spot.

Milana Vayntrub, known for roles in films and TV shows, including Life Happens, This Is Us, Other Space, and more, starred in numerous ads for AT&T from 2013 to 2016, as saleswoman Lily Adams. The carrier brought her back, after a 4-year break, in 2020.