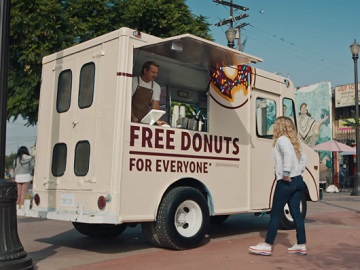 AT&T highlights, in one of its latest commercials, that its best deals are for everyone.

The humorous spot features a donut truck advertising its “Free Donuts for Everyone” offer in a city square. When some people approach the man giving the donuts, the latter informs them that he can’t actually give free donut to everyone, but only to redheads from a small midwestern town that had an oil boom in the late 2000s. He then shows people the disclaimer on the truck, which is written in very small letters as disclaimers usually are.

When one young man complains that it’s very misleading, the donut truck owner answers that not all deals are great deals.

The commercial ends with the onscreen line “No one likes complicated deals. At AT&T it’s not complicated” and shows an AT&T donut truck where everyone gets free donuts. “This really is the best deal for everyone,” a woman says before another line appears on the screen saying that “Everyone gets out best deals on every smartphone with every unlimited plan”.

AT&T has highlighted in several other ads released in the past, starring its spokeswoman Lilly (played by actress Milana Vayntrub) that its best smartphone deals are for both new and existing customers.