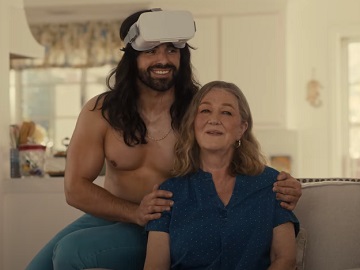 AT&T promotes its AT&T Fiber in a new commercial, introducing Yiorgos, a man described as a “gig digger”.

The spot features a woman whose two adult children want to talk to her about Yiorgos, the man standing in her living room and playing a game with a VR headset. They point out it’s a little odd the fact that he showed up in her life right when she became a gigglinger and that he is a gig digger, which means he’s using her for her AT&T Fiber. “Now that he has hyper gig speeds, he spends half the day shirtless, playing VR games,” the lady’s daughter tells her.

“Kids, why do you think I became a gigillionaire in the first place?” the woman asks them rhetorically. At this point, the man introduces himself as Yiorgos but the guests are not very delighted, answering “We know”.

“Live like a GIGillionaire with AT&T Fiber, now with speeds up to 5 gigs,” the voiceover says at the end of the commercial.

AT&T Fiber comes with simple, straightforward pricing, with no price increase for 12 months, no annual contracts, no data caps, no equipment fees, and security included at no extra cost.