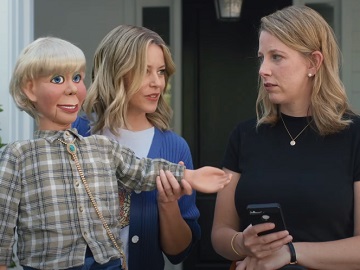 Archer Roose Wines has released a new commercial featuring Elizabeth Banks. This time, she is joined on the screen by the brand’s CEO Marian Leitner, and an unexpected friend.

The spot highlights that we all have different ways of coping and, while some people need a support animal or a terrifying support puppet, others just need some wine. Elizabeth and Marian are shown in front of a house, with luggage by their side, ready to go on a trip.

“Look at the three of us, travel buds, jet setters, ready to take on the world,” Elizabeth tells Marian, who’s looking at her phone and frowns when hearing her friend talking like this. “The three of us?” she asks surprised, not knowing who is the third “travel bud”. Elizabeth explains that the third one is her emotional support puppet Gareth. “You know I can’t fly without him,” she adds. At this point, she starts giving voice to Gareth, who flirts with Marian by telling her she’s a pretty lady. Marian concludes she will definitely need some wine on that flight.

The commercial ends with an onscreen line informing that Archer Roose Wines are now aboard JetBlue flights.

In February 2022, the brand has been involved in a controversy related to a rewards program called “The Snake Rewards Program”, which Elizabeth Banks, who serves as Chief Creative Officer of the wine brand, promoted in a commercial. She initially explained that the customers will be sent a live snake of their choice right to their door, for every 10000 cases of wine they buy. However, soon after that, the actress issued a retraction and replacement of “The Snake Rewards Program” as a result of legal grey areas and multiple violations of state and federal regulations – specifically in regards to the mailing of poisonous snakes across state lines.

She then introduced a new loyalty program, called Roose Rewards, in which customers can accrue points, bonuses, and unlock other exclusive member perks by reaching Enthusiast, Insider or Adventurer status. Rewards include cash back towards the next purchase, early access to limited edition wines and seasonal events, and even exclusive merch.