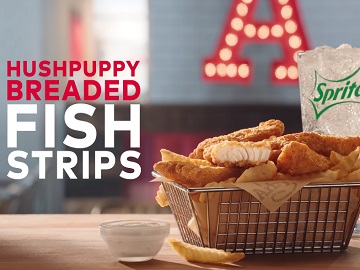 Arby’s promotes its Hushpuppy Breaded Fish Strips with fries in a new ad.

“Fish N Chips is a British thing. But Southern Hushpuppy Breaded Fish Strips with fries… That can only be Arby’s,” the voiceover says in the 15-second spot, which ends with the chain’s tagline, “We have the meat”.

The Hushpuppy breaded fish strips are battered in a crispy hushpuppy coating, fried to a golden brown, and served with a tartar dipping cup. The menu item, priced at $4.29 for a 3-piece order and $6.2 for a 5-piece order, will be available for a limited time at participating locations while supplies last.

The fast-food chain has also introduced to its menu the Cajun Fish Wrap, which features three Cajun-seasoned hushpuppy-breaded fish strips, shredded lettuce, tomato, and a zesty Cajun remoulade spread folded in an artisan wrap. The Cajun Fish Wrap costs around $6.