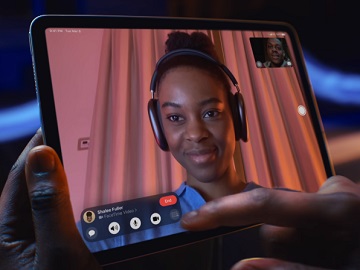 Apple has released a commercial for its new iPad Air, now supercharged by the Apple M1 chip.

The spot showcases the device, giving viewers a glimpse at some of its most important features, such as the 10.9-inch Liquid Retina Display, the 12MP Ultra Wide front camera with Center Stage, the blazing-fast 5G, and more. The ad also highlights that the iPad Air works with Apple Pencil and Magic Keyboard, and features apps like LumaFusion, Genshin Impact, FaceTime with SharePlay, djay Pro, FlipaClip, Protake, Microsoft Word, Apple TV and Safari.

The soundtrack music is provided by Boomerang by Yebba.

The iPad Air, which comes in five colors – purple, blue, pink, starlight, and space gray – will be available for pre-order starting March 11, with delivery starting March 18. Prices start from $599 or $49.91/mo.per month for 12 months.