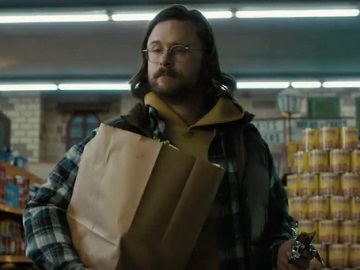 Apple urges you to “Reboot Your Credit Card” in a new commercial promoting its Apple Card.

The spot features a customer (played by Kyle Newacheck) in a convenience store who, after arriving at the check-out counter, begins searching for his wallet. Alarmed that he might not be able to pay for his groceries, including the chocolate bar he has partially eaten, he pats down all his pockets, takes down his vest and he even shakes it, all while the cashier (played by Cheryl Hawker) and other shoppers look at him scowling.

Eventually, he remembers he can apply for the Apple Card in minutes so he takes out his phone and does that, which allows him to check out right away.

At the end of the commercial, which is set to the tune of Chocolate (feat. Trozé) by Big Boi, the tagline “Reboot Your Credit Card” flashes across the screen.

The track, included on the 2020 album “BOOMIVERSE”, is available for purchase on Amazon for $1.29.

The Apple Card, powered by iPhone, lets users get cashback which they can use right away. Apple Card gives unlimited 3% Daily Cash back on everything you buy at Apple, whether it’s a new Mac, a phone case, games from the App Store or a service like Apple Music or Apple TV+. Customers can also buy the Apple products they want with interest-free monthly payments when they choose Apple Card Monthly Installments at check out.

There also is a family version of the Apple Card, called Apple Card Family, which allows two partners to merge credit lines to form a single co-owned account, manage the account together, and build credit as equals.