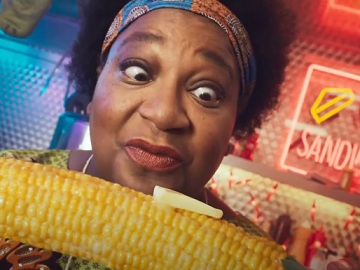 Butter brand Anchor promotes its product in a new advert, titled Butter the Food. Butter the Mood,” highlighting that, “Whether you’re buttering a fluffy crumpet or slathering butter on a crispy bacon sandwich, Anchor will boost your mood and brighten up your day”.

Created by ad agency Engine Creative, directed by Joseph Mann and produced by Josh Smith through Blink Ink, the 30-second TV spot features a diverse cast of people adding Anchor butter to their food. Bread rolls, sweetcorn, scones and even steaks are all buttered by the characters, ranging from individuals to families, who become afterwards witnesses to strange things happening around them, such as toys coming to life, bouncing hats and dancing objects.

The advert ends with the voiceover saying the tagline “Anchor. Butter the Food. Butter the Mood”.

Serving as soundtrack is “Mahalageasca” by Shantel, which has appeared in British-American movie Borat.

“The memorable characters and unpredictable moments bring to life the good mood you get from eating Anchor butter in an entertaining and distinctive way,” Rebecca Alicia Allen, Senior Brand Manager at Anchor, said in a press statement.