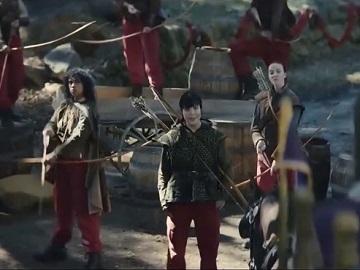 Amazon has released a new commercial to promote its last-minute holiday deals.

The spot features the Robin Hood’s crew having some issues with their pants during a “mission”. Luckily, she scored big with holiday deals at Amazon and bought red pocket pants for everyone.

The song used in the ad is “Carol of the Bells” by Canadian Brass, Elmer Iseler Singers, Lydia Adams, Aaron Davis & David Gray.

In the past few weeks, the e-commerce giant has promoted its deals in several other spots, each featuring iconic characters. One of them shows Romeo and Juliet attending a Christmas party with their families, who can’t stop throwing suspicious and cold glares at each other. Juliet manages to save the day thanks to a karaoke machine she purchased from Amazon, during the Black Friday sales event.

Other spots feature Red Riding Hood turning the wolf into a “good boy” with a squeaky toy she bought from Amazon, a yeti dancing in the snow to the rhythms of Caterina Valente’s 1959 hit single “Bongo Cha Cha Cha”, and a yeti buying a hair dryer from Amazon and impressing everyone at a holiday party with his glamorous look.