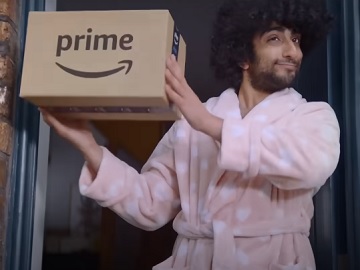 Amazon promotes its Prime Early Access Sale, taking place on October 11 and October 12, in a series of new ads, urging people to get two days of holiday deals before anyone else and feel like a big deal.

One of the spots features a man whose house is flanked by paparazzi because he got access to Amazon Prime Early Access Sale. When he opens the door to pick up the parcel he received, the journalists start asking him questions and taking photos of him.

The voiceover declares that, this year, Prime members get holiday deals before anyone else, which means you’re kind of a big deal, and highlights that the Prime Early Access Sale will be for Prime members only.

In another ad, a Prime member is awaited in front of his house by dozens of super fans. When he hands his toothbrush over to a woman, the latter shouts as if she received something very precious from her favorite artist.

The Prime Early Access Sale gives Prime members the chance to get special savings on thousands of items across all product categories.

Consumers can sign up for a 30-day free trial of Amazon Prime Membership. After this trial period, the membership will cost $14.99 per month or $139 per year.