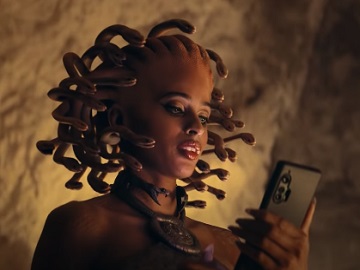 Amazon advertises its Prime Delivery service in a new historically-inspired commercial. This time, the protagonist is a priestess from the ancient Greek mythology, cursed to turn people who meet her gaze into stone.

The spot features the reptile-coiffed Medusa who – after turning another woman into stone – orders some eye-shielding dark sunglasses from Amazon Prime and manages to make friends. At one party, though, when one man tries to flirt with her, she takes off the glasses and looks at him to put an end to this situation.

At the end of the commercial, the voiceover justifies Medusa’s action by saying that “he was asking for it” and adds the tagline “Prime Changes Everything”.

Serving as soundtrack is Nicki Minaj’s 2018 single “Chun-Li,” taken from her fourth studio album, “Queen”. The song is available for purchase on Amazon for $1.29.

Amazon’s “Prime Changes Everything” campaign also a modern retelling of Cleopatra and Rapunzel. While the latter orders herself a ladder to get out of her tower and open and hairdressing salon empire, Cleopatra gives her subjects accessories to help them enjoy desert life.