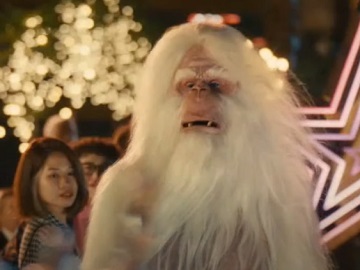 Amazon has released a new ad to promote its Early Black Friday Deals.

The commercial opens with a frosted yeti who lives alone in the woods, surrounded by snowy mountains. He then decides to buy a hair dryer on Amazon – he manages not only to buy a great hair dryer, that makes his hair look amazing but also save big with Amazon Early Black Friday Deals.

The next shot features the yeti making quite an entrance at a holiday party, where everyone is impressed by his glamorous appearance.

The commercial, scored by the 1981 song “Okay Okay” by Pino D’Angiò, from his “…Balla!” album, ends with the voiceover urging viewers to “Shop legendary deals”.

The e-commerce company is famous for its ad campaign. Another recent ad is a modern take on the Red Riding Hood’s story and shows Red Riding Hood throwing a squeaky toy at the wolf when he appears at her grandmother’s door.