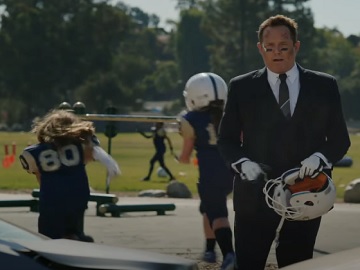 Mayhem is the captain of the Pee Wee football team in the latest Allstate commercial.

The spot features the havoc-wreaking character, played by Dean Winters, in the backseat of a car, along with several children dressed in their football gear. “I am the captain of the Pee Wee football team. And we may be small, mighty, annoying. And you’re so tired from playing defense against us that your focus is about to ride the bench. And if you have cut rate insurance, not even a hail Mary will save you from paying for this,” he says referring to the damage the woman causes to another car after leaving the children to their football practice.

At the end of the commercial, the brand’s spokesman urges viewers to get Allstate and be better protected from Mayhem like him.

In another recent commercial, Mayhem was a groom’s football-obsessed best man who explains to the groom that having his big day during the Big Game is the worst because he is physically there, at the wedding, but mentally he is actually somewhere else – thinking about the game, obviously.