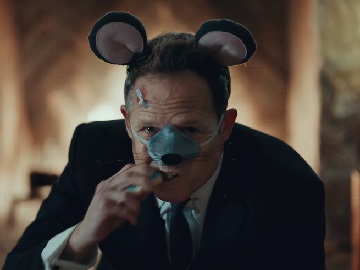 Dean Winters stars in a new Allstate commercial as Mayhem, personifying a mouse that unintentionally wreaks havoc in a woman’s house.

The spot features the actor wearing mouse ears and nose and talking as if he is a mouse. He tells the story of how he entered a family’s home and crossed the living room, the night before Christmas. The woman who saw him got so terrified she took a cushion and threw it in the air, in her attempt to protect herself from the “intruder”. The small rodent managed thus, indirectly, to cause a mess in the living area, where the Christmas tree and various other holiday decorations were already nicely laid out. Unfortunately, the Christmas tree fell to the floor and some items placed near the fireplace burst into flames.

Mayhem urges viewers to protect their homes with Allstate from mayhem like this.

Winters returned as Mayhem to the screens earlier this year, in January, for the first time since June 2020.