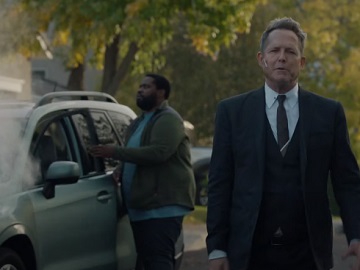 Allstate has released a series of new ads starring its longtime spokesman Mayhem to promote its home and auto insurance coverages.

One of them features the havoc-wreaking character, played by Dean Winters, dancing on a sidewalk for what it seems to be a TikTok dance video, and saying he’s the latest “Hashtag Challenge” and everyone on social media is trying him. “I’m trending so hard that ‘hashtag common sense’ can’t keep up,” he also says, while busting some weird dance moves, convinced that “this is going to be get tens and tens of views.” As he does that, he distracts a driver’s attention and his car ends up hitting a garbage truck. Mayhem gets closer to the damaged vehicle and explains that, “if you don’t have the right auto insurance coverage, you could be left to pay for this, yourself”.

At the end of the commercial, the voiceover urges consumers to get Allstate and be better protected from Mayhem for a whole lot less.

Other two spots feature Mayhem breaking a house door after taking a detour with an exercise bike and causing an accident because he portrays some fries the driver has been craving.